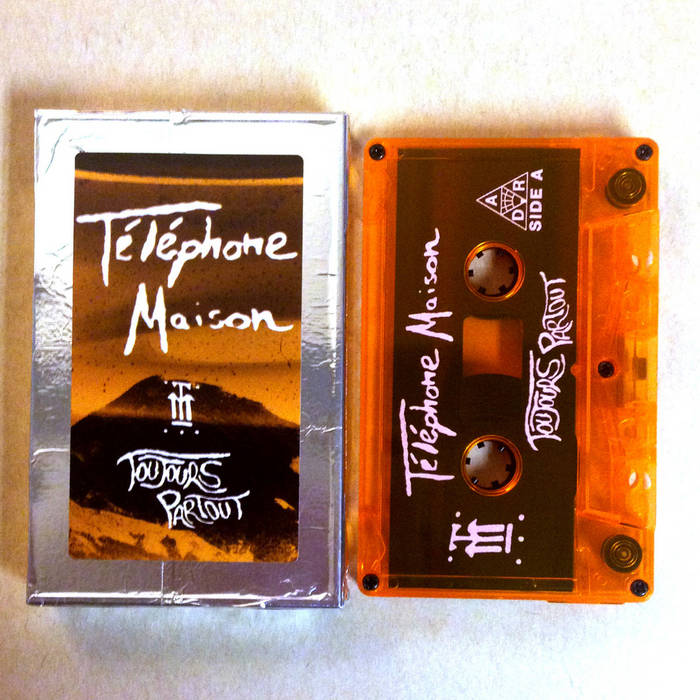 "The music of Téléphone Maison might be hard to apprehend. It is diffuse, always everywhere. Yet once intangible things are seized, they become sources of constant renewal, great satisfaction, and a deep gaze into the internal-external spectrum. Thoughts wander as many forms jostle in a revolving ballet taking us higher into faraway galaxies, nevertheless so near from the starting point: peace and calm. Waves, textures and extraterrestrial vibrations make Alexis Maurice Brien (Téléphone Maison) one of the most indispensable acts in the cosmic Canadian and francophone musical soundscape. Special mentions to the fresh packaging from Arachnidiscs and the cameo from YlangYlang, who sends the recordings further up and out."
~ Weird Canada

"Toujours Partout is a bit of an ambient-minded experimental electronica masterpiece. It begins with textures of spacey overtones weaved in with head-moving base tones, ornamental blips, and irregular percussion. As the songs go on, heavily filtered vocals join in. When his voice is layered over itself multiple times, as in the opening section of “Je ne sais plus comment,” it takes on the sound of a chorus of inarticulate ghosts, completely arresting yet hollow at the same time. Each song has an interesting narrative structure – constantly morphing and shifting, often to unexpected destinations. “Rivages masques” begins with the sound of old film rattling behind ominous synth groans that quickly turn into the sound of a predator approaching, faster and faster as the percussion builds. Though instead of the enormous crescendo this leads you to expect, the music plateaus and ethereal vocals from Jeunesse Cosmique labelmate YlangYlang implore you to “look at everything.” As a listening experience, this album forces you to stay on your toes through the continual introduction of unexpected elements like this. By the time the final notes are reached – more sustained, wavering synth tones – it is clear that this is a highly accomplished release. It’s subtle grooves hypnotize, it’s constant variation keeps it highly interesting, and the immense creativity invested make it a worthwhile experience." ~ Grayowl Point

"Téléphone Maison is what Mardi Gras on Mars would sound like: out-of-this-world-pop of the highest order. The elements of his music are very familiar, but Brien warps and bends his electronics far beyond earthly recognition. The 50 cassettes being pressed in this run come sealed in adhesive foil for maximum freshness, so that should give you some indication of the purity of delights you’ll find inside."
~ Quick Before It Melts

All instruments by : Alexis Maurice Brien
with
YlangYlang : synth, vox on A3, B2
Eddie Wagner : synth on B1, B4