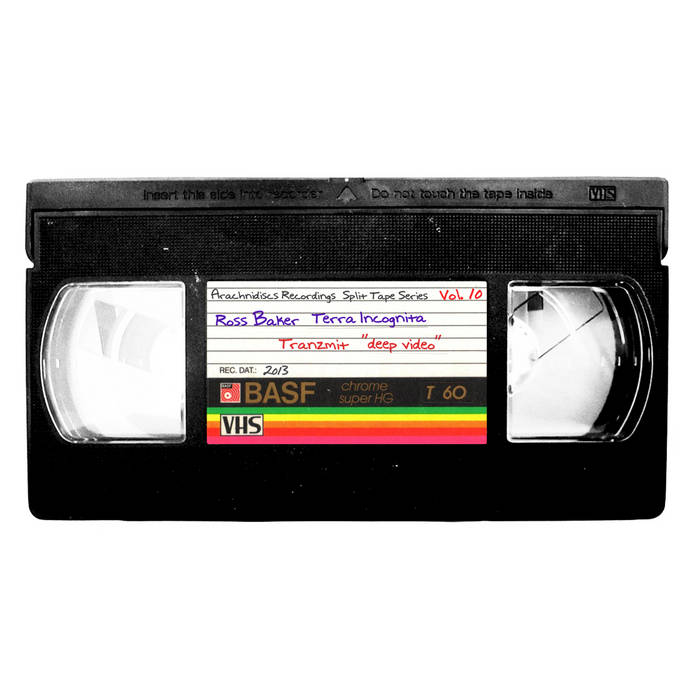 ROSS BAKER has been making music since he got ahold of a tape recorder at the age of 10. From early tape and radio abuse, to his electronic project Second Thought, to more recent lo-fi ambient acoustic sounds, his music has been linked by a love of contrast and collage. He describes his music as "ruralist", expressing a passion for nature and an old-fashioned, communal way of life.

Terra Incognita: is a half-hour collage salvaged from at least three hours of recordings, soundtracking the countless distant landscapes and buildings glimpsed momentarily during 28 years of car, bus and train journeys. Sprawling farm and forest punctuated by sinister undentified buildings and distant motorways. Ambient washes and sci-fi movie memories with a synthpop interlude.

TRANZMIT is a sound-collage/electronic side project of Jakob Rehlinger (of BABEL and Moonwood). He mixes found sounds from cassette tapes, YouTube and the airwaves as well as field recordings.

"Released on Arachnidiscs Recordings as part of their split tape series, “Vol 10” sees Ross Barker and Tranzmit share tape space, each producing one long piece of music to excellent effect. With an expansive sound and fine production “Terra Incognita” is an outstanding slice of drone/experimental almost kraut music, the opening section sounding as if you have entered a newly discovered cavern that sparkles with crystals and mystery, as the piece progresses vocal samples begin to creep in, until a voice begins reciting a story or possibly a dream, the tale illustrated with electronics and field recordings pulling the listener in, the voice finally giving way to hypnotic sounds and a deep drone that writhes with energy until it too surrenders to snatches of radio shows and all manner of noise. Throughout the piece this cut and paste approach continues, creating a disorientating yet highly creative journey for the adventurous that even includes an eighties inspired song in the middle. Over on the other side Tranzmit treads similar ground with “Deep Video”, electronic textures and vocal samples blending together, the samples cut up and repeated inducing a trance like state in the listener changing your perception of time and space. Using samples from the internet, spam e-mails and TV commercials, the whole track is a wonderful ride through modern media that has been shoved through a sonic blender, intoxicating and highly recommended. With each side lasting 30 minutes this could one of the best hours you have experienced for a while, strap in and enjoy the world. " ~ Terrascope

" First up is Ross Baker with “Terra Incognita” ... The documentary style, non-fiction type of words seemingly take us to a conclusion, as the waves fade out, but then we are brought back into the ambience that we sort of started off with. To say that this piece is coming full circle, not too much unlike going up and then back down a hill, would be somewhat accurate ... The TRANZMIT side of this split begins with an audio clip discussing music being played outside in the snow by a street musician who I assume is probably not TRANZMIT. The voice utters the phrase “Just put the money in there; that’s all we care about, right?” in regards to whether people give him money because he is in fact or a good musician or they just feel sorry for him playing outside in the cold. This line of retrospection is repeated, chopped, screwed and all sorts of things are done to the audio of it every which way but loose. This seems to become a theme for the TRANZMIT installment as we then start with a Dr. Pepper commercial and are seemingly flipping through the stations ... if this was to have a visual image with it and not just be audio, it would display a person flipping through television channels." ~ Raised By Gypsies