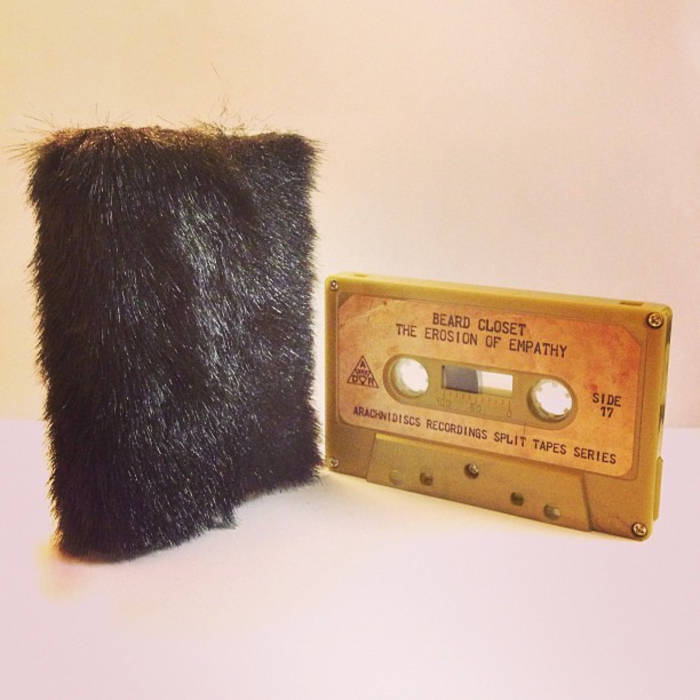 "..... housed in a lovely fur-lined box, “Vol 9” sees Beard Closet and Primate Pyramid share a side each. Treating us to a dose of drifting noise, squalls of overdrive and hypnotic soundscapes Beard Closet do strange and interesting things to electric guitars notes and chord fighting with noise creating an landscape that crackles with life, music that lives for the moment, vibrant and intense. Again featuring one long piece, “The Erosion of Empathy” demands to be listened to and is richly rewarding in return. Featuring two pieces “Arc With No Story” and “Health Collapse”, Primate Pyramid tread similar ground creating dense textures and slabs of sound with the guitar as the primary instrument. Sounding like the soundtrack to some obscure Sci Fi classic, the listener is free to add his own visuals to the music and it floats, crawls and rumbles from the speakers both tracks having a strong sense of identity the spirit of early Tangerine Dream definitely present in the deep space sounds created." ~ Terrascope

"Arachnidiscs is a small Canadian label specializing in “music for and by weirdos.” In this case, that takes the form of a split cassette (in a fur-covered case, because, of course) by solo experimental improv guitarists Beard Closet and Primate Pyramid. And as you’ve probably already guessed, this isn’t the kind of music you’ll find yourself humming in the shower, even if you are a fan. It’s ambient music that is the opposite of soothing. Side A is one long piece by Beard Closet, which moves from soft-pulsing chiming sounds into dissonant shards of distortion and screeching ring modulation before a more peaceful (but still heavily distorted and processed) resolution. Primate Pyramid’s side of the tape is two pieces and features similar extreme guitar processing but a different approach to playing technique and composition. Arc With No Story is all about subtle textures and ominous atmosphere, while Health Collapse is a slowly shifting wall of noise and feedback. " ~ NOW Magazine

"Another amazing release from two of the greatest artists in the city. These days, people talk about music blowing-minds with the same casual abandon that they also describe their last meal, which is the true manifestation of the terror of Orwellian double-speak (the expectation being that ultimately, both will pass through the body unremarkably into the toilet bowl of history only to have the process repeated). Such platitudes do a real disservice to a gem of an album like this . P (BC) & P (PP) deliver again as guitars cascade in a fecundating matrix woven in pensive wonderment throughout these three tracks. Translation: This three song collection is worth picking up for the furry cover art alone, but exists on a plane well above "double plus good" rampant in yearly "best of" lists (which will also be crumpled and discarded like their grocery store counterparts after the trip is over)." ~ Ostrich Tuning

"... a colossal assortment of dynamic changes ... My 80s child-mind wanted me to step into the warm nostalgia of Spacemen 3, but Beard Closet’s drones are carefully interrupted and embellished to prevent a comfortable groove. I never lost interest while listening to this masterful piece of weirdness ... Primate Pyramid provide a sinister, John Carpenter-esque counterpoint ... Transcendent tones and contours feature in this roaming, no-wave landscape. Themes come and go in the track, collapsing into something new by each minute’s end ... “Health Collapse,” threatens speaker overload from its beginning, and never lets up ... It’s a strange scene by the end of the tape, one where nothing is certain and everything is odd."
~ Gray Owl Point

"I can now check "furry" off the list of adjectives I've used to describe DIY packaging. Split release of improvised guitar ambience from Beard Closet and Primate Pyramid on Arachnidiscs Recordings. As on his Horror Fiction release, Beard Closet starts slow, building a base of circulating ambience before gradually tearing open the sky, revealing blindingly blackened guitar tone. What's particularly new and interesting for me here, is the introduction of a much noisier element, and ultimately a very satisfying and melodic finish that descends into glitchy madness. On the flip, Primate Pyramid takes a softer, more measured approach, reverberating strummed guitar, sheets of noise and static, and waves that roll into and out of consciousness before creating a caustic bath of near industrial harsh noise. The entire release is in a constant state of movement. Wow." ~ Guide Me Little Tape

"The ninth volume in Arachnidiscs’ split series pairs two Toronto free-guitar travelers in canny packaging fit for the grip of the hairiest palms. Beard Closet’s contribution is the sidelong blast-off “The Erosion of Empathy,” awakening from a day of radiance before the rotten sun beats down. On the backside, Primate Pyramid delivers two shorter pieces with the contemplative swirls of “Arc With No Story” and ghostly shapes emerging from the black sea of “Health Collapse.” Shining, gleaming, streaming, flaxen, waxen…"
~ Weird Canada