The Last Generation Of Love (No Love Records)

by THE HOLY GASP 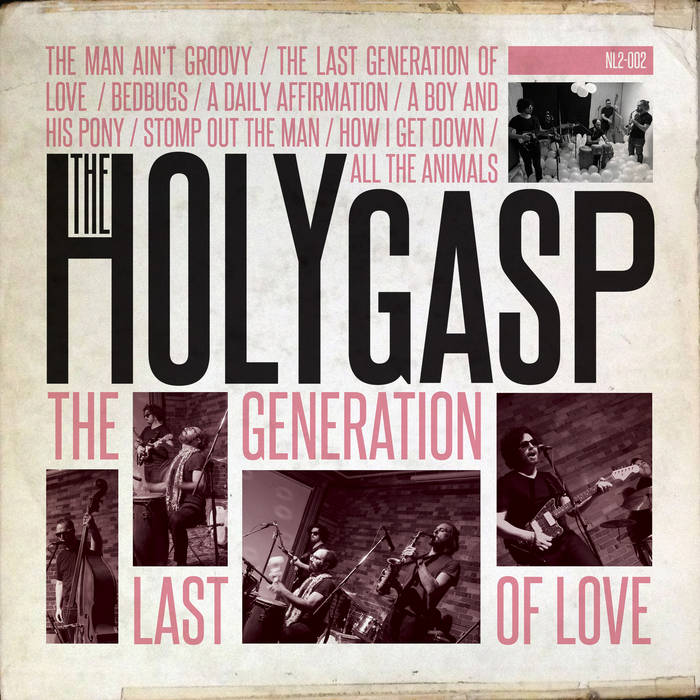 The Holy Gasp is a damn-the-Man beatnik revival conga revolution, a boxcar and a jug of wine, a groove, daddy, and the farthest thing from a king sized bust!

The Holy Gasp's debut album "The Last Generation of Love" (NL2-002) is the second release on Arachnidiscs' newly resurrected NO LOVE imprint which trades in more accessible indie weirdness than its parent label.

"There’s not an ounce of fat to be seen here—just an astoundingly crazed and powerful collection of cohesive protest."
~ Gray Owl Point

"Warning of an impending apocalypse with bongos and brass instruments, Toronto five-piece The Holy Gasp have come to preach repentance and redemption on The Last Generation of Love .... the band’s debut burns with a fire-and-brimstone intensity pointed directly at apathy, cultural decay, and the “generation that don’t wanna make a stink” ... Hackman is an eccentric, electric frontman, aiming his smart lyrical tirades at modern-day pestilences from parasitic insects (“Bedbugs”) to polarizing politicians (“Stomp Out the Man”) to self-affirming preschoolers (“A Daily Affirmation”). He’s perfectly matched note for note by his bohemian band mates, a brotherhood of musical chameleons."
~ Quick Before It Melts

"Hugely theatrical vocals, driving conga drums, stabbing horns, and an overall feel of wild desperation permeate this wild track. It feels like a lost ’60s bossa nova played at triple the speed with an apocalyptic poet dropping remix bars over it. In short, this one’s different."
~ Independent Clauses

"Plainly put, Hackman is quite mad. He approaches singing with the maniacal, reckless abandon that one normally associates with the craziest of punks." ~ Ride The Tempo

"I can safely say that this is the punkest shit I’ve heard in a long while. Directly derivative of nothing ... the Holy Gasp are aural sex, untethered and vigorous." ~ Naked Underground

Arranged collectively by The Holy Gasp: