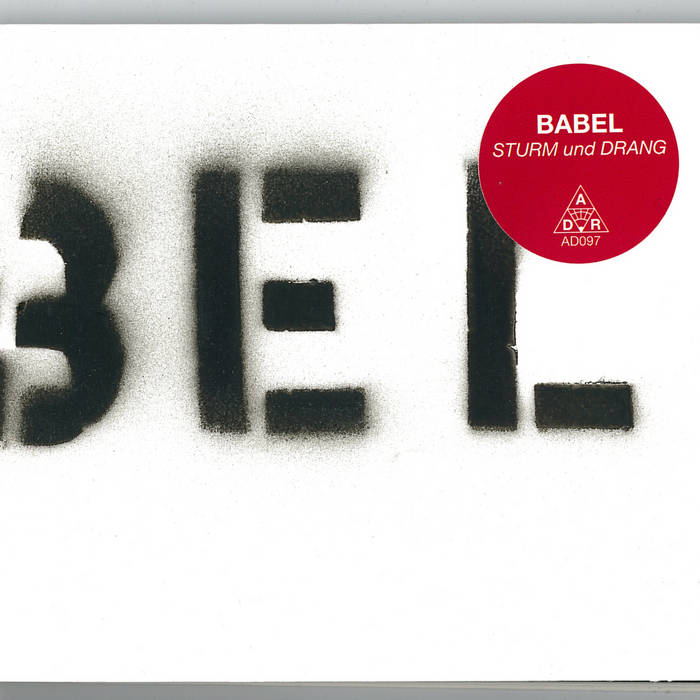 "... three thematic counterparts going on a psychedelically stomping bare foot, where the emphasis is certainly on the minimalism and rhythm rhythm rhythm associated with the classic krautrock sound (“Sturm.01-03”), before going shot-for-shot into more serene dreams and foreign landscapes intent on flowing out into the ambient (“Drang.01-03”) ... the “Drang” pieces pursue a purer ambience, a oneness with the void perhaps. And then there are the “Black Lodge” and “White Pine” tracks, dipping into Angelo Badalamenti and Twin Peaks waters with inspiration and restraint. A project in metamorphosis ... 'Sturm und Drang' shows that Babel is towering with talent." ~ Weird Canada

"Even though I'm not that conversant with sound collagist / psychester Jakob's modus operandi for this project, I'd suspect that this exercise in guitar gamelan would require the strings to be restrained in gaffa tape or somesuch, so as to avoid unnecessary sustain and bleed into the rhythmic warp and weft. Having had the merry hell beaten out of 'em, these tightly-bound victims seem to summon up an early period Glenn Branca-conducted unit gatecrashing a Z'ev-hosted percussion seminar, making for a surprisingly wide span of timbres, considering the fairly limited sources that were selected. And it's not the bug-eyed clatterfest one would expect, as one or two segments; with their doctored vocalese and primitive wind instrumentation, open a portal into weird M.R. Jamesian rune-casting invocations.....Mr. Karswell...they're playing your tune...." ~ Terrascope

"The pieces here are improvisational, but the sound seems more structured than the tracks on Heurter. Babel also includes flutes and electronically manipulated vocal drones, which creates a much richer sonic tapestry. Finally, where as heurter was firmly rooted in an ambient sound, STURM und DRANG song’s vary from drone to stuff that has an unusual pop and smooth jazz undertones. With each album I hear, I’m enjoying Babel more and more." ~ Biloxi

" I realize that “normal” is a relative term, especially in music, so I don’t want you think that at all reflects this album as being in any way normal in the general sense of things. These songs do seem to possess a certain sense of rhythm though, which almost makes them closer to normal than not, but there are enough other qualities to pull this back down to an abnormal reality ... There is some amazing drum work on these songs and ... undertones of the western style of music. I’m not talking about your grandfather’s western though. This is like something straight out of “Django Unchained” ... On a side note, I read that these songs were all improvised and I also really respect the sound of this CD for that as this is one of the finest releases I have ever heard and it’s something so much more than the noise/instrumental/experimental genres." ~ Raised By Gypsies