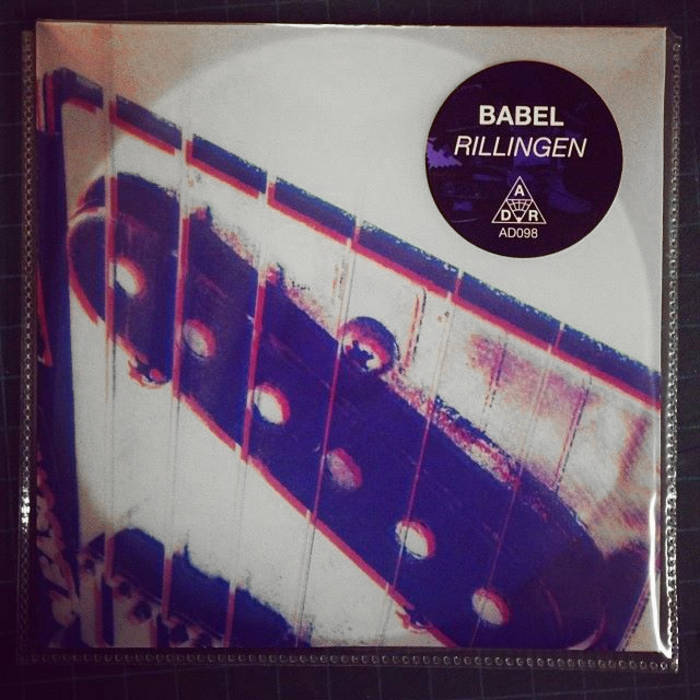 "Rillingen is a four-part suite of outer-wave surrealist swirl, a drone harvest harbouring deep-seated feelings of loss, lust and laboured ambitions. Soaring to the furthest regions of cerebral antipathy, Rillingen is at once an awesome amalgam of space and sound, and a vessel that houses the harbinger of the End of All Things. It’s the kind of meditative composition that invokes elation and dread at the same time. Anne Guthrie may have played with opposing factions of the same febrile coin, but Babel’s transgressions are apocryphal in nature – this is the ominous calm before the storm. I think this is a great record that says so much with seemingly so little – what the best drone albums should do – and the final 37 minute opus that closes out the experience is one of gentle waves of catharsis, both transmogrifying and rendering all other thoughts meaningless."
~ Sonic Masala


"The four tracks seem knot together into a kind of symphonic form, the first three totaling some 25 minutes, the last 37. The general sound is of an electric drone/throb, a few parts the Fripp of "No Pussyfooting" (sans Frippertronics), a few more of a sunnier version of Godspeed You! Black Emperor. The first three sections are all about vastness, sometimes a bit overdoing it (the closing wind sounds on the third sections, for example) but generally resting in a rich swirling sound area that's not unpleasant. Rehlinger takes the opportunity to tease out more structural strands in the fourth part, separating out various sonorities, allowing more breathing room while still maintaining the kind of simmering ecstatic output heard earlier (here, I think of Loren Connors at his most otherworldly and Branca rears his head as well)." ~ Just Outside

"Haunting guitar-based ambient, brings to mind the densely layered looping of Richard Pinhas and the crepuscular moodiness of Evan Caminiti, throw in a richly textured guitar tone akin to Tom Carter and you have this masterpiece. A lot of delay, space, drones, perfect music for your third eye. Fuck me, this is beyond beautiful. I can die happy now." ~ KZSU FM

" ... the sounds of something that is experimental, electric and instrumental. ... a certain industrial feel to these songs ... tinges of noise that resemble something such as a showdown in the old west. It’s funny how we go from seemingly being in a factory (That’s why it’s industrial, right?) to the old west ... has me thinking of Clint Eastwood in a steampunk outfit telling me to reach for the sky. And I know that image haunts me maybe 75% of my waking hours (constantly when asleep) but this CD would also bring it out in you." ~ Raised By Gypsies

"The final piece of Babel’s trilogy, Rillingen is a dense, textured album of cold, throbbing drones. Featuring only a guitar that’s been run trough a freeze pedal then looped, there’s a very industrial feel to the album, but not in a mechanized way (if that makes any sense) ... chaotic and oppressive ... worth checking out ...." ~ Biloxi