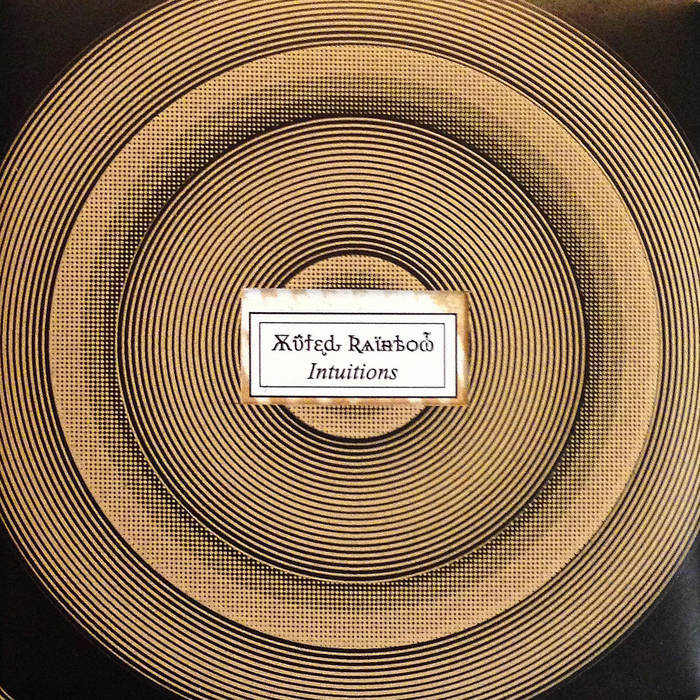 "Intuitions" is the result of sparse improvisational sessions conjured in Shanghai bedrooms and living rooms during 2012. Hours worth of recordings were trimmed, mixed and mastered with poetic freedom at Zulmàt studio in Rome, Italy.

"Tripping the light fantastic through this glorious collection however, I need to stress that there's nothing muted or Dulux pastel-shaded here. Instead this vibrant slice of improvised acid folk (fed through very discreet electroacoustic processing), greets the listener with a series of dazzling squiggles and slashes, all rendered in bold primary colours. Aided and abetted by a trio of pluckers/strummists (Gabriele de Seta, Gregorio Samsaro and Pupa Tag), one might imagine a whole host of exotic junkshop finds like fonofiddles, mandolas, psalterys and cymbalums being used. Though every screech 'n' twang remains uncredited. So you and I will just have to suck it in and rely on guesswork - which is half the fun as I'm sure you'll agree. Very difficult to select a standout track, if pressed, but after a moment or two of fairly deep thort, I'd head towards Michelle's wordless siren-tones that delicately swirl and waft around the seven minutes and thirty-five seconds of ‘Ave Maria’. A wide and expansive soundscape is generated which is made all the more surprising when one realises that these seven tracks were initially recorded in the confines of various bed and living room spaces. For those au fait with The Habibibyya, Angus Maclise, MV & EE, Forest and Denmark's Shiggajon...this is pretty essential...remember the name?"
~ Terrascope

"'Classical without class, psychedelic without psyche, songwriting without writing' is how Muted Rainbow describe their work. A collaborative project of Michelle Proksell, Gabriele de Seta, Gregorio Samsaro and Pupa Tang, the group has released its latest CD-R, Intuitions, on Toronto boutique label Arachnidiscs. The seven tracks here are a result of many hours of improvisation that took place in 2012 in makeshift bedrooms and living room studios. The sounds were then shipped off to Rome’s Zulmàt studio, where they were edited and mixed together. There are moments of classical tranquility, such as “Ave Maria,” where delicately plucked acoustic guitars and raw female vocals engender a calming aura. Elsewhere, rough-hewn synths combine with buzzsaw like strings to an unsettling but beautiful effect (“Oceano”). The remainder of the CD-R works its way through moments of improvised noise, acoustic ambiance, and acid folk to magnificent effect. " ~ Decoder Magazine

"Intuitions really does sound like a forgotten moments captured in time. It’s a slow burn of an album and has an organic fluidness that allows it to unfold at its own lucid sensual pace, giving way to some truly beautiful arrangements. As Michelle has noted before, she’s really at her best when joined by others, and Intuitions captures just that."
~ Live Beijing Music

"This is a different kind of noise. We begin with these delicately plucked acoustic strings which quickly change into a frenzy of distortion. This sets the pace for the entire CD filled with both beauty and chaos at the same time ... on some levels it does sound like they’re playing either run down or broken instruments. Not because of the quality, but because of the sounds which they are making."
~ Raised by Gypsies

"How does a musician convey what's in their heart? Is it possible to make that is all heart? What about. external things like convention or some expectation of what music should be. I don't know what any of that means, actually. Brodie West and Charlie Haden say that honesty is the most important goal. In some music you can really hear that. I don't know how. How does one hear honesty in an instrument? I like this album because it feels that way to me. Honest, I mean. There is a sense of place, a part exposed and explored and shared. Who can say what the intention or the process is? I know for many that means a lot, but for me, it is all the sound. This lady sure sounds nice. She is in a trance. It feels like it's beyond her, and I like that. Clairvoyant music. Electro-acoustic improv is not always so sweet, but this sounds like the music a massage therapist plays when they want for you to feel nothing but relaxed. I have trouble with my heart and my mind. I have trouble being happy, as many people do, without some fear or sadness getting in the way. They tell me to engage in mindful living. It's not about oppressing bad feeling, it's about learning how to feel bad without feeling like the whole world will end. This is mindful music, I think. This lady knows the world will keep turning no matter what choices she makes, or how unpleasant she feels. It's nice of her to share that with us." ~ Offerings